Moving Into Modernity: Three Books About the Early 20th Century

The late 19th century and early 20th century were a tumultuous time of great changes in American history. Around the turn of the century, America’s demographics were rapidly changing and transforming the country.  Immigrants from southern and eastern Europe flooded into the cities of the Northeast, and, for the first time, the urban population surpassed the rural population.  Industrialization changed how people worked and how people lived.  New inventions and forms of entertainment changed the way things were done enabled Americans to enjoy something new, leisure, and activities like movies, Vaudeville Theater, amusement parks, and spectator sports not only provided enjoyment, but also fostered the assimilation of the new immigrants into the American melting pot. Progressives took note of the many problems, from sanitation to childhood mortality and everything in between, and sought to improve conditions. By the 1920s, a conservative backlash arose as traditionalists tried to slow the rapid pace of change, and the country experienced the first Red Scare, a new surge of nativism, immigration quotas, the rebirth of the Ku Klux Klan, and a pronounced clash between modernism and fundamentalism. 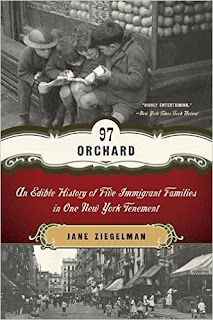 The story of this time in New York City is captured and told beautifully at the Lower East Side Tenement Museum. The Lower East Side has been the home of successive generations of immigrants, and each generation made its mark, and continues to make its mark.  In the late 1800s, the area was full of tenements, where families crowded into 350 square feet apartments, usually with no running water.  Today, the area is one of the most desirable areas of New York City, and those same apartments rent for thousands of dollars per month. The museum gift shop has a huge selection of great books related to the history of the neighborhood. Here are a few titles that I enjoyed reading.

97 Orchard: An Edible History of Five Immigrant Families In One New York Tenement, by Jane Ziegelman, is an excellent introduction to the area and history of immigration in New York City.   The author creates a vivid picture by telling the stories of five families who lived in the same building between 1863 and 1935: German, Italian, Irish, and Jewish (both Orthodox and Reform).  Using food to tell the story is fun and unique.  Even more fun is the fact that the book contains forty recipes that the reader can try. 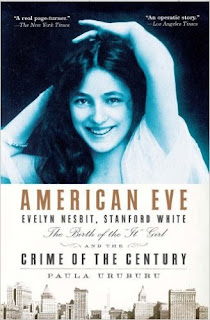 Paula Uruburu wrote American Eve, the story of one of the most infamous scandals and murders in American history, perhaps the first “crime of the century.” Teenager Evelyn Nesbitt gained the notice of photographers and artists in New York City, and she quickly became America’s first “It girl.” Her pictures were published and displayed in galleries, she appeared on stage in Broadway shows, and her movements were reported daily in the press.  Part of her fame was derived from the fact that she became the mistress of Stanford White, one of the most famous, richest, and accomplished men in the city.  She also incurred the attention of another millionaire.  A murder ensues, followed by a lurid trial.  It’s a page-turner. 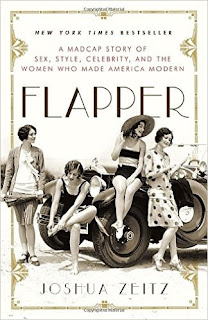 Flapper: A Madcap Story of Sex, Style, Celebrity, and the Women Who Made America Modern by Joshua Zeitz is a fast read, a history of flappers, the young women who scandalized older generations by bobbing their hair, raising their dress hems, and smoking, cursing, drinking, driving, and carrying on in public in ways that “ladies” had never dared to carry on in the past.

Posted by Histocrats at 4:00 AM