By Jeff Burns
Due to various circumstances, I’ve probably read less than summer than any other summer in my life.  It wasn’t a bad summer at all; I just couldn’t get into a reading mood.  That didn’t stop me from adding great books to my reading list.  Here are some titles I hope to get to very soon.

Annette Gordon-Reid has made a name for herself as a leading historian on the subject of Thomas Jefferson, particularly his relationship with Sally Hemings.  In 2009, she published The Hemingses of Monticello: An American Family.  It is about more than the relationship between Jefferson and Hemings; it is also about their children and their relationship with Jefferson.
Blood at the Root: A Racial Cleansing in America by Patrick Phillips is about one of the darkest moments in Georgia history, the organized violent campaign in 1912 that forced more than 1,000 black citizens of Forsyth County. For the next seventy years, the county remained all white.
On a lighter note, food history is another of my interests, and there are a couple of new food history titles on my list. Michael Twitty is a chef and food historian whose specialty is African-American cooking and its influence on southern cuisine. His book is called The Cooking Gene: A Journey Through African American Culinary History in the South. 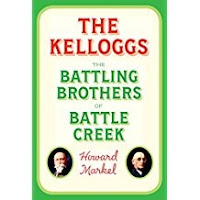 Laura Shapiro writes about food history from a women’s history perspective, and her latest is What She Ate: Six Remarkable Women and the Foods That Tell Their Stories. Read it and find out what food reveals about Eleanor Roosevelt, Eva Braun, and four others in a sort of culinary biography.
Finally, a story about food, medicine, quackery, the food industry, and major sibling rivalry: The Kelloggs: the Battling Brothers of Battle Creek.  You know they created the whole breakfast cereal industry and changed the way Americans ate breakfast, but you might not know the origin story of their food and their company, and the intense family dysfunction between the two brothers.