Nazi era Germany has to be one of the most fascinating eras in all of human history.  It’s not just the horrific scale of the death and destruction of the Holocaust and World War II, or the fact that tens of millions of people were directly involved.  Much of the fascination centers around the question How could this happen?  How can the country that created some of history’s greatest scientists, thinkers and artists also create a society in which ordinary people witnessed and participated in such unspeakable acts.

Here are four books I recommend. Each in its own way delves into the mystery by examining German society from different angles. 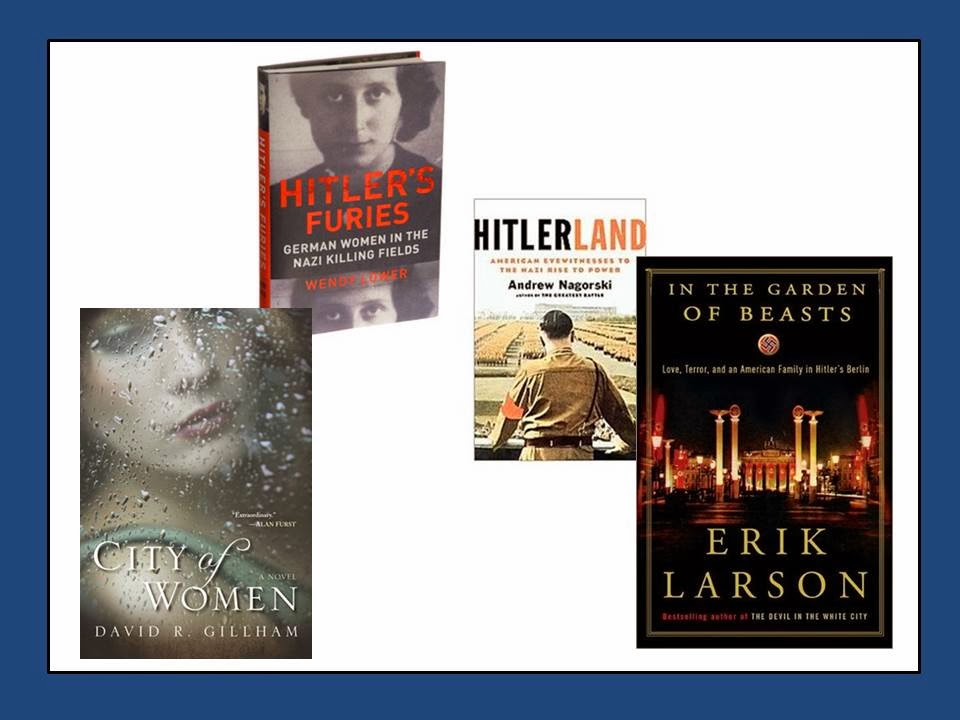 Two of the books paint a picture of 1930s Germany from an American perspective.   Hitlerland: American Eyewitnesses to the Nazi Rise to Power by Andrew Nagorski creates a mosaic portrait of Germany by telling the stories of dozens of Americans who experienced it, from reporters to diplomats to athletes.  Some opinions were favorable, some unfavorable, some mixed, but, taken together, they reveal that there was much confusion and disagreement about just what Hitler and the Nazi Party represented.
Erik Larson’s In the Garden of Beasts: Love, Terror, and an American Family in Hitler's Berlin is the story of America’s first ambassador to Nazi Germany, a mild mannered history professor named William E. Dodd,  and his family, specifically his daughter Martha.  As Ambassador Dodd struggles to protect American citizens and their interests in Germany and urges the U.S. government to exert more pressure on the German government, his flamboyant daughter has one affair after another with top party officials and even Soviet spies.  The family’s year-long experiences offer a truly unique perspective.
The other two books offer different views of German women during the war.  First is a novel:  City of Women by David R.  Gillham.  The year is 1943, and Berlin is virtually a city of women. While their husbands are away at war, or perhaps captured or killed, Berlin’s women struggle to carry on, up against shortages, suspicions, paranoia, guilt, and a myriad other obstacles.  It’s a fascinating look at the homefront, the enemy’s homefront, that we don’t normally see.
Hitler's Furies: German Women in the Nazi Killing Fields by Wendy Lower is a disturbing look at women in the German front lines.  Thousands of German women accompanied troops as they moved eastward, as secretaries, clerks, drivers for example.  Other women accompanied their SS husbands as the vanguard of the German migration into the new lebensraum, “the living space” of the newly conquered Eastern Europe.  Lower discovered that many of them were willing, and sometimes eager, participants in brutal acts committed there.  The stories are difficult to read, but they make for a more complete picture.
Will we ever find out why Nazi Germany happened?  Probably not, but these books add a little to the understanding.
Posted by Histocrats at 4:37 PM