The term “soul food” didn’t really mean much to me growing up in south Georgia; the cuisine it referenced was pretty much what we called everyday food.  My maternal grandmother was the oldest of 11 children, from a rural farming and sharecropping background, and my mother was the oldest grandchild, which meant she grew up more of a sister to the other 10 instead of a niece.  My father was one of 10 children.  They grew up eating and cooking what we know call soul food without even knowing it.  For them, it was what was available and affordable to feed a lot of people.

The term itself came into vogue in the 1960s when “soul” was attached to lots of terms used by civil rights activists to generate black pride and awareness of the traditional foods and cooking styles used by generations of southern blacks and taken north during the migrations of the World War I and II eras by those seeking jobs, and freedom, in places like Pittsburgh, Cleveland, Chicago, and Detroit.


Soul food has its roots in slavery, as Africans brought to the South key ingredients like rice and okra, and combined them with American ingredients like beans, yams, and cornmeal and European ingredients like cabbage, turnips, and other greens.  The meat of choice was pork, often the cuts and pieces leftover after slaughter that the slave master’s family didn’t eat:  ears, tails, feet, head, jowls, chitlins (chitterlings - intestines)  However, soul food cut across racial lines.  Poor whites were just as likely to eat it because the ingredients were cheap, and even wealthier whites often ate it because it’s what their cooks cooked.  Soul food is just basic down-home country cooking.  In his 1969 Soul Food Cookbook, Bob Jeffries summed it up thusly: “While all soul food is southern food, not all southern food is ‘soul.’


Today in the foodie world, southern cooking and soul food are riding new waves of popularity, with TV shows, restaurants, and cookbooks touting “southern cuisine”, “farm to table”, “down home”, and even “upscale or new southern food.”
Here are some recent books for more information: 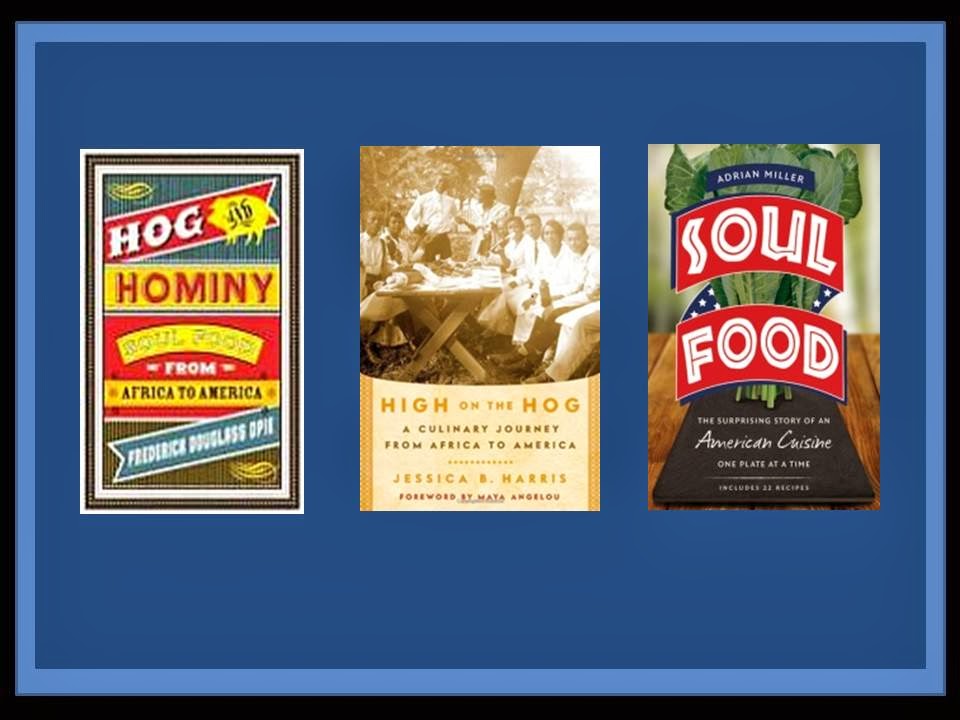 Soul Food by Adrian Miller - In this insightful and eclectic history, Adrian Miller delves into the influences, ingredients, and innovations that make up the soul food tradition. Focusing each chapter on the culinary and social history of one dish--such as fried chicken, chitlins, yams, greens, and "red drinks"--Miller uncovers how it got on the soul food plate and what it means for African American culture and identity.
Hog and Hominy: Soul Food from Africa to America (Arts and Traditions of the Table: Perspectives on Culinary History) by Frederick Douglas Opie - Hog and Hominy provides a definitive history of the grand social forces and unforgettable personalities that have revolutionized Africa American cooking since the twilight of the Jim Crow system.
High on the Hog by Jessica Harris -Winner of the IACP Award for Culinary HistoryAcclaimed cookbook author Jessica B. Harris weaves an utterly engaging history of African American cuisine, taking the reader on a harrowing journey from Africa across the Atlantic to America, and tracking the trials that the people and the food have undergone along the way.

Posted by Histocrats at 3:27 PM