As we endure the dog days of summer, you might want to spend them indoors (or by the pool) reading a book or two about man’s best friend.  Here are some titles to consider.

He was born in France during World War I, immigrated to the United States, making his way to Hollywood, where he became the biggest box office draw in the film industry.  He received more votes for the first Best Actor Academy Award, but he was denied the award.  When he died unexpectedly, radio stations broke into programming with the news, and millions mourned.  Rudolph Valentino? No, Rin Tin Tin, Hollywood’s first animal superstar.  Two recent biographies, one by Susan Orlean and one by Walter Donway, tell his fascinating story.

Bronwen Dickey’s new book, Pit Bull: The Batte Over an American Icon, is the story of the breed that went from the heights of popularity in America to the depths of demonization, demonization to the point that the breed is banned in some jurisdictions, subject to euthanization even if no attack has occurred.  Dickey researches the history of the breed, and, on a larger scale, examines the relationships between Americans and their dogs throughout history. If you’re not a fan of bullies, this book will likely change your mind.  If you are a fan, it will affirm what you already know, that an entire breed is not evil. 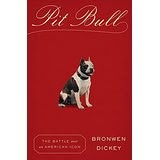 Melissa Fay Greene is an Atlanta author who has written several really good books about twentieth century history including Praying for Sheetrock, Last Man Out: The Story of the Spring Hill Mine Disaster, and The Temple Bombing.  Her newest book is called The Underdogs: Children, Dogs, and the Power of Unconditional Love, and it’s about the bond between service dogs and their children (and adults). The chief story is that of Karen Shirk, a woman who was stricken with a rare neuromuscular disease in her twenties.  A nurse suggested getting a service dog, but no service dog provider would help.  Shirk got her own dog and trained it.  A thousand dogs later, she specializes in training service dogs for clients previously thought to be unserviceable.  Look no further for inspiring stories of unconditional love that only dogs can provide.

Posted by Histocrats at 1:56 PM