The Westerns: Adventure and History in Books

In the mood for a story about the West?  Let me recommend a few good books that you may not have heard about. 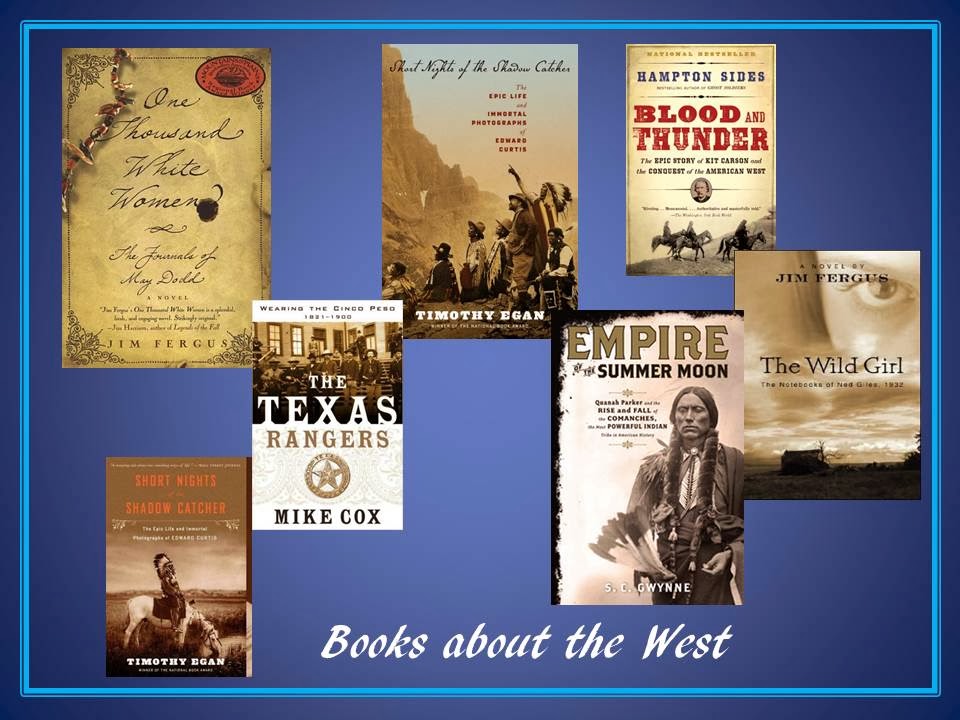 First, the novels:  One Thousand White Women: The Journals of May Dodd and The Wild Girl: The Notebooks of Ned Giles, 1932, both by Jim Fergus.  They are both fictionalized accounts of journals written by very interesting people in unique settings.
Imagine a secret treaty between the US and the Cheyenne nation in 1875.  The Cheyenne chief demands that, in order to expedite the assimilation of his people into a peaceful coexistence with whites, 1000 white women must be sent west to become wives of Cheyenne warriors.  The government rounds up prostitutes, criminals, and asylum patients, women who wouldn’t be missed by many.  One of the women selected is May Dodd, committed to an asylum by her parents because she has an “unnatural” sexual appetite.  (At the time, “unnatural” meant that a woman enjoyed sex, and some women were medically treated and even institutionalized for the malady.)  May tells her own story and the stories of several other women as they adjust, or not, to Cheyenne life, including a former slave who becomes a great warrior on her own.
In The Wild Girl, a rancher’s young son is kidnapped by a small renegade band of Apaches.  A large expedition is mounted to rescue him.   Joining a motley crew of millionaire playboys, cowboys, and soldiers in this last great Indian “adventure” is a young photographer named Ned Giles who forms an unusual relationship with the wild girl of the title, a captured member of the Apache band used by the expedition to find the renegades and perhaps to be traded for the boy.
One of my favorite John Wayne movies is “The Searchers,” in which the Duke is searching for his niece, stolen by the Comanches.  The movie was inspired by and loosely based on the real life story Cynthia Ann Parker, a girl stolen by Comanches.    The Comanches dominated a huge territory in the southern plains, terrorizing Anglos, Mexicans, and other Indians throughout Texas, Oklahoma and northern Mexico for many years.  Cynthia Parker’s son, Quannah Parker, became the most famous Comanche chief, leading at the height of the tribe’s power.  S.C. Gwynne chronicles this history in Empire of the Summer Moon: Quanah Parker and the Rise and Fall of the Comanches, the Most Powerful Indian Tribe in American History.
After reading Empire, I was led to read The Texas Rangers: Wearing the Cinco Peso, 1821-1900 by Mike Cox. The Texas Rangers were formed chiefly to fight the Comanches before becoming the chief law enforcers of the state.   (Wayne’s character in “The Searchers” is a Ranger.)  It took a particular kind of man to be a Texas Ranger, and Cox tells their story well in this very interesting book.
We all know about the Trail of Tears, but how much do you know about the Long walk of the Navajo?  Blood and Thunder: The Epic Story of Kit Carson and the Conquest of the American West by Hampton Sides tells the story of Kit Carson’s brutal conquest of the powerful Navajo nation and their forced relocation to a barren reservation.
If you’ve ever seen any photographs of Indians, you are probably familiar with the work of Edward Curtis, probably the most famous Indian photographer who desperately tried to capture the history of the Native Americans before they all disappeared in the early 20thcentury.  Timothy Egan wrote a fascinating biography of the man and account of his life’s work in Short Nights of the Shadow Catcher: The Epic Life and Immortal Photographs of Edward Curtis.
Finally, here are two novelists that you can’t go wrong with:  Larry McMurtry, the author of Lonesome Dove, and Tony Hillerman, the author of the series of mysteries featuring Navajo policeman, Joe Leaphorn.

So, saddle up and head west, Pilgrim!

Posted by Histocrats at 8:00 PM