In the 19th century, readers devoured thrilling tales of adventure by and about men (and a few women) exploring the unknown.  As Americans moved westward, carving out new lives for themselves and their families, others were exploring exotic locales and facing unimaginable dangers.  Some lived to write or tell their stories, sometimes becoming celebrities and inspiring other storytellers.
Off the coast of Chile, in 1821 a whaling ship spotted a boat on the open sea, occupied by two haggard  and deranged men, surrounded by, and chewing on , human bones.  They were survivors of one of the most well-known maritime disasters of the 1800s, the sinking of a Nantucket whaling ship by a sperm whale.  Three boats containing a total of twenty men survived the sinking; only eight survived the two thousand mile long struggle.   The incident inspired Herman Melville to write Moby Dick. 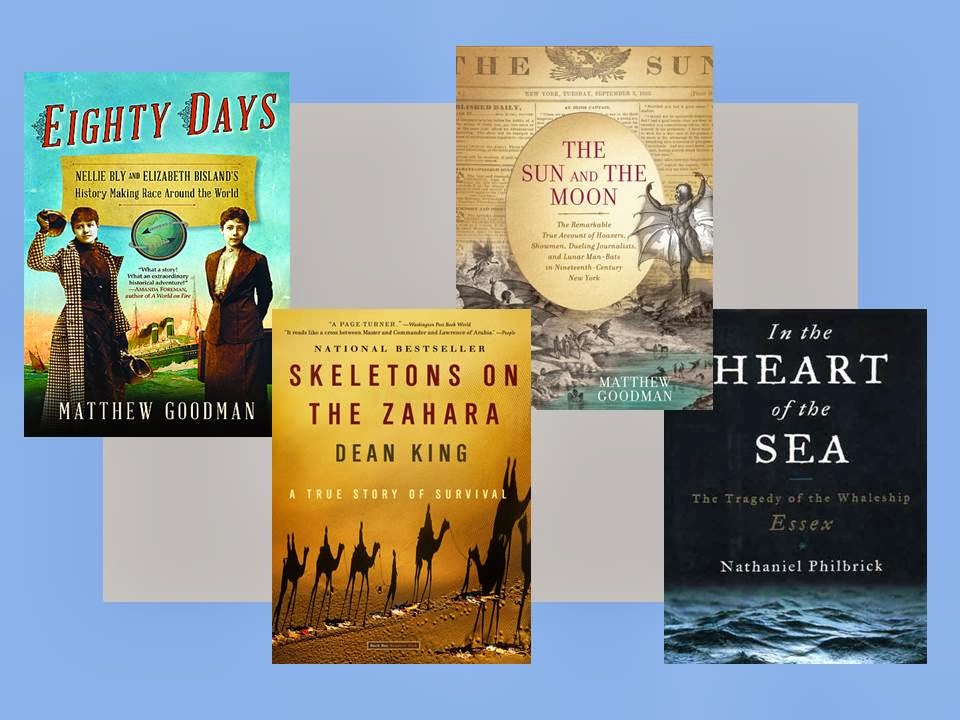 In the Heart of the Sea: The Tragedy of the Whaleship Essex  by Nathaniel Philbrick is the story of this incident, unparalleled in the history of whaling.  Philbrick, a maritime historian, and a sailor himself,  provides a detailed account of the Nantucket whaling industry and a description of shipboard life.  The book is extensively researched and footnote, but Philbrick’s writing style makes it a page-turner. (Ron Howard-directed movie version scheduled for 2015 release)

Skeletons on the Zahara: A True Story of Survival by Dean King recounts the experiences of twelve American sailors who were shipwrecked off the coast of Africa in 1815, captured by desert nomads, sold into slavery, and subjected to a hellish two-month journey through the bone-dry heart of the Sahara.  King did exhaustive research and even re-traced part of the desert journey the men were forced to take.  The story of survival is every bit as thrilling as it was when it was first published in the 1800s, when it was read and admired by Henry David Thoreau, James Fenimore Cooper, and Abraham Lincoln.  (History Channel docudrama 2006)

Sea.  Desert.  What locale could be more exotic in the 1800s than the moon?  We know the zenith of the newspaper industry in America was near the turn of the 20th century, when William Randolph Hearst and Joseph Pulitzer’s newspapers tried to out-sensationalize each other for the public’s pennies, in the era of the newsies.  However competition was fierce in the early 1800s as well.

The Sun and the Moon: The Remarkable True Account of Hoaxers, Showmen, Dueling Journalists, and Lunar Man-Bats in Nineteenth Century New York by Matthew Goodman brings to life that intense cutthroat atmosphere that led to one of the greatest hoaxes in American history.  On August 26, 1835, a fledgling newspaper called the Sun brought to New York the first accounts of remarkable lunar discoveries. A series of six articles reported the existence of life on the moon—including unicorns, beavers that walked on their hind legs, and four-foot-tall flying man-bats. In a matter of weeks it was the most broadly circulated newspaper story of the era, and the Sun, a working-class upstart, became the most widely read paper in the world.

Goodman also wrote Eighty Days: Nellie Bly and Elizabeth Bisland's History-Making Race Around the World.  Inspired by the Jules Verne novel, Around the World in Eighty Days, two pioneering female muckraking reporters, Bly and Bisland, attempted to complete the feat, and beat each other doing it.  While their names are not as well-known today (Bly more known than Bisland), the literate world was riveted by their adventures.