Drink in the History

Food is such an important and distinctive part of world history and cultures that it should be no surprise that many books have been written on the subject of food history.  From time to time to time, I’ll discuss a few that you may be interested in reading for yourself.  This first installment will be about beverages that have shaped history... 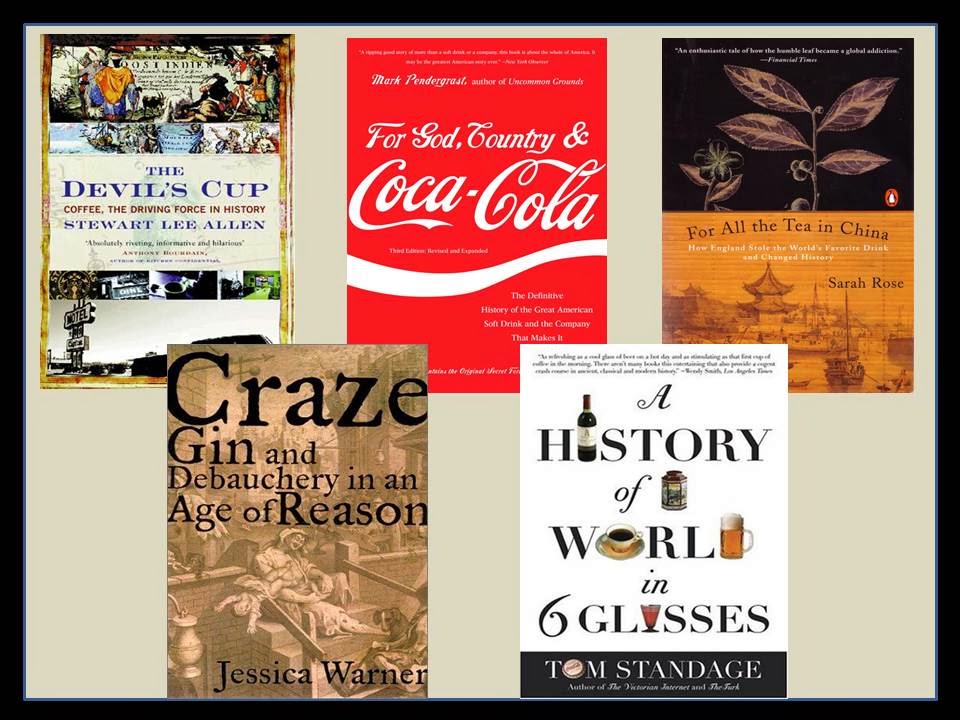 One of my favorites in this category is A History of the World in 6 Glasses by Tom Standage.  Standage delivers just what the title promises, and it becomes a very unique way of looking at world history.  Instead of Bronze age, Stone Age, or Iron Age, he describes the ages of beer, wine, spirits, coffee, tea, and cola.  Each beverage ushered in a major phase of human history.  For example, the development of beer parallels the development of agriculture, cities, and laws, and the development of Coca-Cola marked the beginning of modern globalization.  For Tom Standage, each drink is a kind of technology, a catalyst for advancing culture by which he demonstrates the intricate interplay of different civilizations. You may never look at your favorite drink the same way again.
Craze: Gin and Debauchery in an Age of Reason by Jennifer Warner traces the effects of gin, “the original urban drug,” on the city of London, following its introduction around 1720.  Gin quickly became associated with squalor, depression, criminality, and wretchedness.  While the London power fell deeper under the curse of gin, politicians and social commentators like Daniel Defoe, William Hogarth, and Samuel Johnson railed and took action against it, with little impact.
While gin seemed to threaten western civilization in the estimation of many, Stewart Lee Allen posits in The Devil's Cup: A History of the World According to Coffee that it was the discovery of coffee that gave birth to and drives the history of modern western civilization.  Uncommon Grounds: The History of Coffee and How It Transformed Our World by Mark Pendergrast  has a similar theme and is equally interesting.
Pendergrast also wrote For God, Country, and Coca-Cola, the unauthorized history of the great American soft drink and the company that makes it, from its origins as a patent medicine in Reconstruction Atlanta through its rise as the dominant consumer beverage of the American century.
Tea drinker?  Then you might like For All the Tea in China: How England Stole the World's Favorite Drink and Changed History by Sarah Rose.  It is the dramatic story of one of the greatest acts of corporate espionage ever committed. By the middle of the nineteenth century, the British East India Company faced the loss of its monopoly on the fantastically lucrative tea trade with China, forcing it to make the drastic decision of sending Scottish botanist Robert Fortune to steal the crop from deep within China and bring it back to British plantations in India. His dangerous odyssey, recounted here, makes for an exciting read over a cup of tea.
Take your pick, pour a cup, and enjoy!
Posted by Histocrats at 7:52 PM