In the spirit of full disclosure, I have to admit that I haven’t yet read the three books I’m discussing below, but they are in my queue.  (Curse you Teaching for getting in the way of reading!)  However, I am very confident that I will enjoy them because I thoroughly enjoyed the Erik Larson works that I have read :  The Devil in the White City and In the Garden of Beasts.  Larson is an investigative journalist, novelist and teacher of nonfiction writing who is obviously prolific, as the previously mentioned books of two of the books discussed below were published in 2010 and 2011. 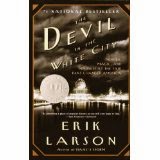 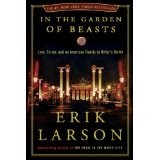 If, like me, you enjoyed Devil  and/or Garden, you probably were entertained and educated by Larson’s incredible eye for detail and his gift for setting the scene.  His books are about major transformative events, Chicago’s  Columbian Exposition of 1893 in Devil and 1930s Nazi Berlin in Garden, but he also tells parallel stories that the reader might not know much, or anything, about.  We learn about Henry Holmes in Chicago, considered America’s first documented serial killer, and we learn about William E. Dodd, the American ambassador to Nazi Germany whose family finds itself involved with Nazi officials and Soviet spies. 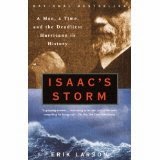 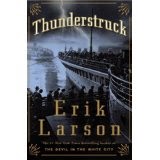 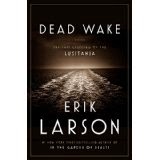 Isaac's Storm: A Man, a Time, and the Deadliest Hurricane in History is about the hurricane that devastated Galveston Texas in 1900, killing 10,000 people, the worst disaster in American history.  The parallel story this time is about Isaac Cline, the senior Weather Service official on the scene.
Thunderstruck is the story of Guglielmo Marconi’s invention of wireless telegraphy or radio interwoven with the story of another murderer, Hawley Crippen.  Their two seemingly disparate worlds apparently collided, making for a compelling story.
In March, Larson’s newest book will be released, Dead Wake: The Last Crossing of the Lusitania. Everyone knows the story of the Lusitania, the British luxury liner sunk by a German U-boat in 1915, killing 128 Americans and edging the U.S.  Closer toward joining the first world war.  As usual, Larson details the event itself and simultaneously brings to life a full cast of interesting characters.
Posted by Histocrats at 4:37 PM